St John's is located in the tiny village of Havering Atte Bower. There is very limited parking available along Elmer Ave (Ave running alongside St John's) and we kindly request parishioners park as closely together as possible to maximise space available when services are on.

There is limited parking available on the church driveway, however it is reserved for the disabled and the elderly. Please do not park in the gateway and block emergency vehicle access. St John's is situated closely to Bower Village Hall & Havering Park Riding Stables. Both sites hold events at the weekends and it is very important NOT to park in their designated parking areas. There is limited parking available adjacent to the village Green and further down in the village. Please park courteously if you are parking in the surrounding streets. Our neighbours and local residents must have reasonable & safe access to their properties. There is additional parking available in the Orange Tree Public House on Sunday mornings for those coming to 10am Worship. St John's is a short walk up Orange Tree Hill from Collier Row. 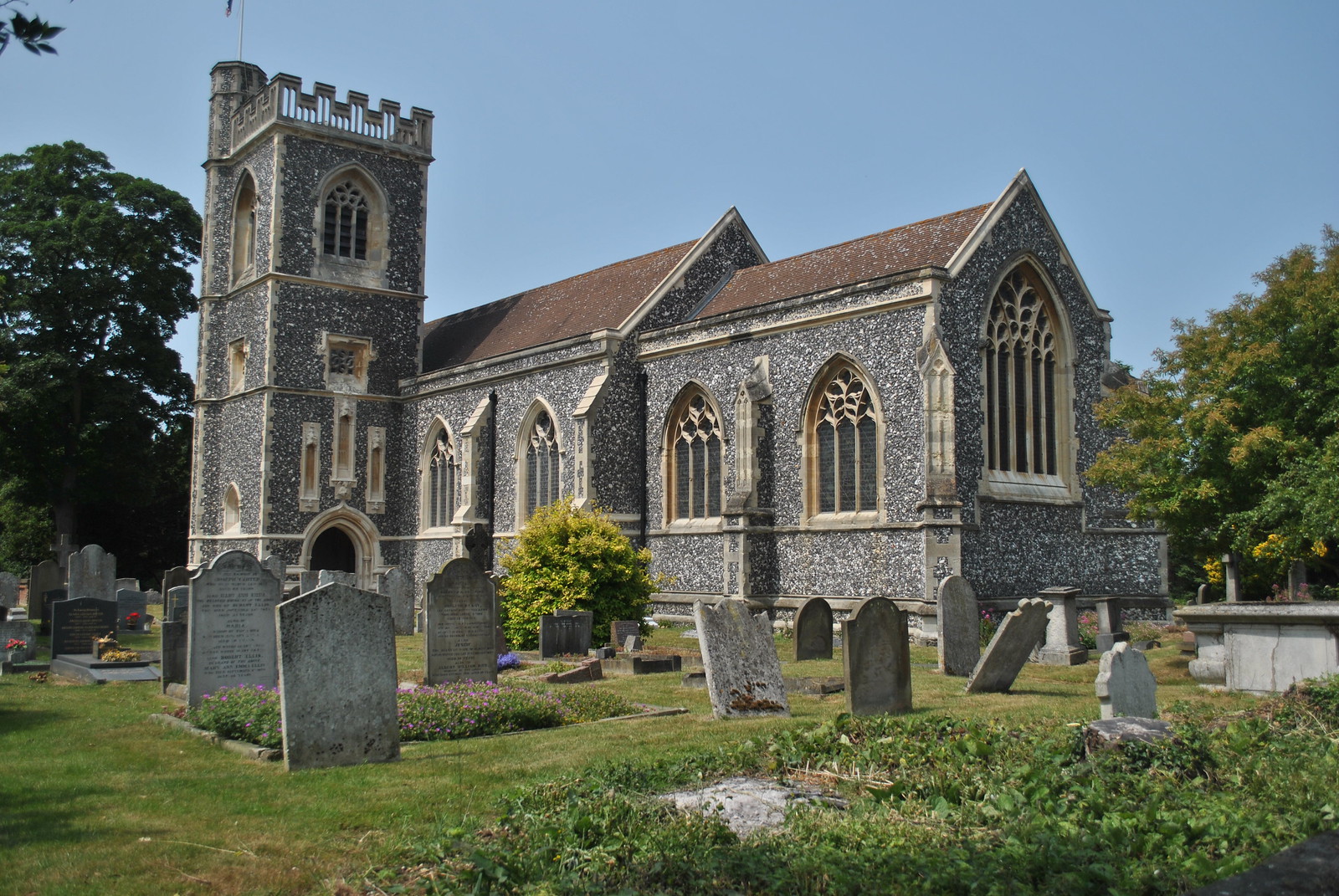 The History of St John The Evangelist Church

There has been a church on this particular site, since the time of Edward the Confessor.* One of the pieces of evidence for this, is the 800 year old Purbeck marble font, at the back of the church. Over the years, the church has served as a chapel for the many noble and royal people, who passed by as a result of Havering Palace being in existence.

The church as we know it today, was built between 1876 and 1878, after the previous building (also known as St Thomas) was demolished. The last service was held on Easter Day, April 16th 1876, after which all services and church meetings were temporarily transferred to a barn at the back of the Orange Tree public house, which is still in existence. The new church was consecrated on Saturday 13th April, 1878. During this time, there were two major benefactors, Mrs Macintosh and Anne Pemberton Barnes. Both were key to the church, and both contributed financially. For this reason, St Johns has the unusual feature of a dual entrance porch, designed, purposefully, to give equal welcome to both women, each of whom, had a house in the opposite direction to the other.

Within the church, the Mural Tablets were preserved and put into the new church, as was the painting of the Lord’s Supper, by the artist Mr P. C. Haydon – Bacon. St Johns has a beautiful organ, (STILL WORKING NICELY!) which was installed in 1902, replacing the one which had been in the previous church, which had been made in 1836.

There are five stained glass windows, four on the south wall, and one large one behind the altar on the east wall, which was replaced in 1946 after a stray German landmine destroyed the original during World War II. There are two war memorials located on the site. One, inside, along the south wall, is dedicated to the memory of the eleven men killed in the Great War. The other, is by the gate to the Green, and is dedicated to the five men killed in World War II. There are two war graves, situated between the church and the riding stables.

The church has six bells, a treble, second, third, fourth, fifth and tenor. They were dedicated in 1897, replacing the single bell that was there before.

The Parish Room (the church hall) was built in 1902, with money provided by Ann Pemberton Barnes and her son. A second, smaller Parish room was built behind the original in 1933. This building was known as the Pemberton Room (and still is!).

In 1997, the Church Hall, and the Pemberton Room both were connected, with a second floor added in from the high ceiling of the hall, and facilities vastly improved upon what they had been before.

*Two particular myths arose from this time. One was that Edward was in Havering Park (backing onto the site that the church currently sits on) and the noise from the Nightingales stopped his prayers. He then prayed that there would no longer be Nightingales in the park. Apparently, since then, there indeed have not been! Let us know some time if this is not the case…

The other myth is that on some occasion, Edward was in a procession, a beggar asked for money, and as Edward’s almsman was nowhere near, Edward took a ring off his finger, and gave it to the man. So the legend goes, years later, two pilgrims were in the Holy Land and spoke with the same old man; who revealed he was St John the Evangelist. He gave them the ring, and asked them to return it back to Edward. Hence the name Have-a-ring Atte (at the) Bower. Who knows?